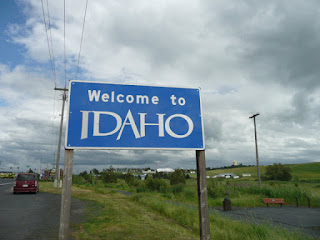 Dearest Readers.
Etta and I have made it to the beautiful state of Idaho. 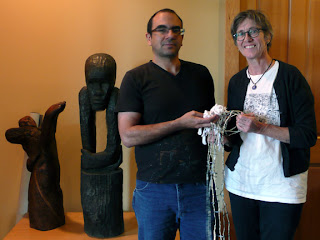 I delivered Io Palmer's Hand to Hand gloves to her boyfriend John at their home in Moscow Idaho. She teaches art just over the border at Washington State University in Pullman, WA. Io is in Greece on her way to India for an artist residency, so John is accepting them for her. We're holding her 7'H x 2"W ladder made of twisted newspaper Iraq war stories and bobby pin rungs. The white gloves are chopped up and intended to be in a heap on the floor. We're in front of two of Io's Dad's carved wood sculptures. 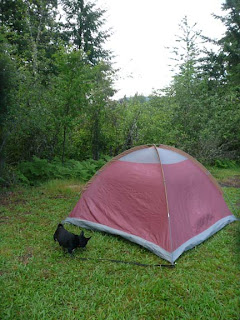 After the delivery of Io's gloves, and a coffee with John, Etta and I drove through the undulating hills of Idaho to our peaceful campground at Dworshak State Park.

This hilly area is called "The Palouse" and reminds John of Mongolia, or perhaps Teletubby Land. The landscape is very wierd. To me the hills seem like huge ocean waves. 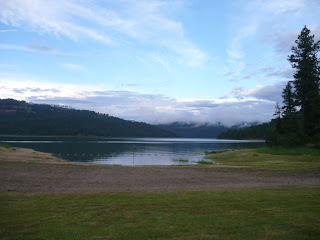 Our campsite on the edge of The Palouse was tucked down a deep canyon road with 10 mph switchbacks that went on for 3 steeply descending miles, eventually dead-ending in the park. The campsites are tucked around a lovely mountain lake inhabited by little squeeky squirrel-like short tailed rodents, deer, rabbits, pheasants, owls and singing birds. Etta went wild diving into critter holes. 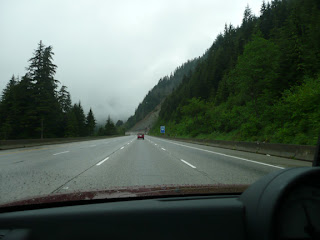 The day began at 9AM with beautiful weather in Seattle. I'm traveling East for the first time on this journey–heading in the direction of home. Miss Etta and I are going solo again, camping rustic style until I reach Iowa City where the next glove artist, Dana Haugaard lives. We hit a misty rain driving over the mountains of the steep Snoqualmi National Forest. 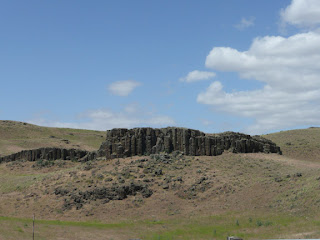 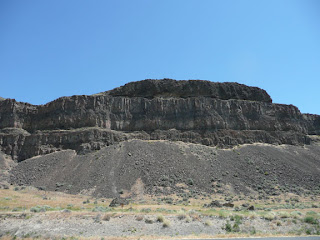 This quickly changed on the other side of the peaks. The temporate, rainy coastal zone gave way to scrub brush, windy desert areas, irrigated farm and grazing lands and rugged outcroppings of basalt from prehistoric lava flows. The landscape of Central Washington was a surprise. It resembled the semi-desert areas of Arizona and New Mexico, minus the heat. The temps were pleasantly 70-ish. 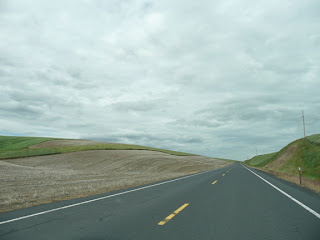 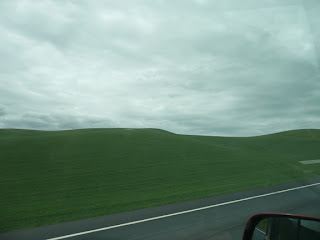 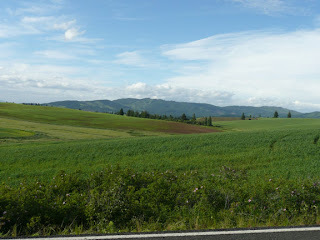 After crossing the Columbia River near Ellenberg WA, I picked up the two lane state road 26 and first encountered the wavy, grassy, tree-less hills and holes of The Palouse. The depth and drama of the dips and rises of the landscape slowly increased as I crossed Washington and entered into Idaho.

Evening arrived in a flaming palette of orange sky splattered against a silhouette of dark green pines. 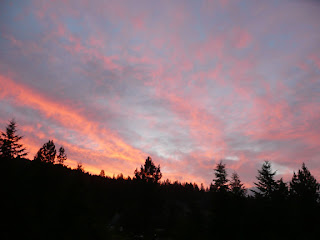