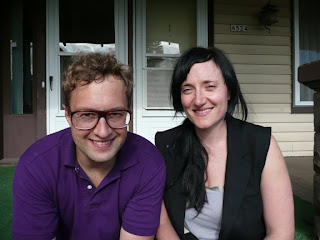 I arrived last night in Portland, Oregon at the home of my daughter Ayla and her boyfriend Joel in the North-East section of town close to the north end. 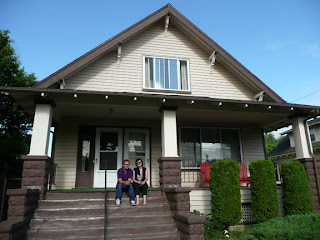 They’re renovating their big house, circa 1915, and tending numerous raised vegetable beds. I’m impressed with their energy, and delighted to be here a week. I’m blessed again with cool, sunny, summer weather. Etta loves sniffing and exploring in the fully fenced-in back yard. Joel, Ayla and I cracked open the bottle of Coro Mendocino, a blend of reds from my wine tasting at the McFadden Vinyard on Sunday, and enjoyed relaxing in the yard. What a relief to rest and renew for a few days! 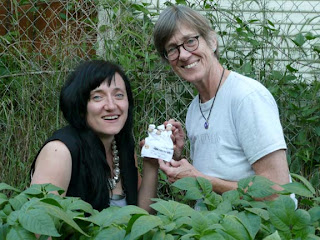 I returned Ayla’s six Hand to Hand Project gloves from 2006. The one we’re holding depicts the little head and finger-bodies of the judges in the Saddam Hussein war crimes trial in Iraq. We’re crouching behind her ample bed of potato plants behind the house. 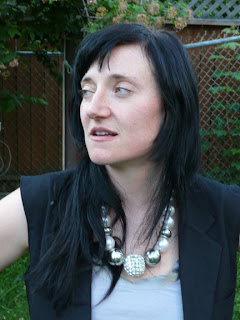 I gave her the big necklace that the LA artists bestowed on me last week. I saw it as a gag gift, but Ayla likes it as it is. It suits her style.

I broke camp yesterday morning from the Jedediah Smith Redwoods State Park in coastal Northern California, and immediately stopped at the Hiouchi Café in the tiny hamlet of Hiouchi, CA about a mile from the campsite. They had a sign for Wi-Fi and coffee. 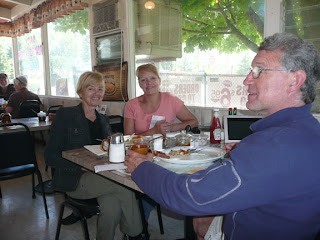 My waitress Linda in the pink top is seated with travelers Vilma from Switzerland and Dan who had car-camped across the street. 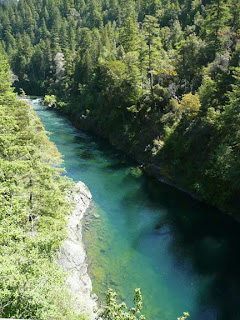 Linda claimed that the Smith River that runs through the Siskiyou Mountains nearby is the cleanest in the country. She might be right. 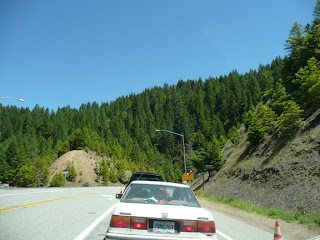 For most of the day I drove up and down steep inclines in this mountain range that straddles California and Oregon. In this picture I’m in a line of cars waiting to go through a single lane tunnel. A flashing yellow road sign reads, “Stop When Flashing For Bicyclist In Tunnel.” I now know why Oregon’s license plate sports the image of a tall pine tree. The mountains here are predominately evergreen. 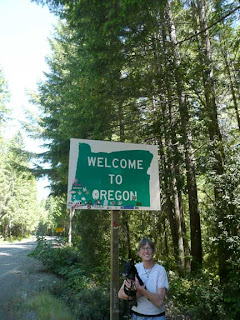 Oregon welcomed me with a family of kids and grandparents in an RV who suggested they take Etta and my picture in front of the stickered sign. I let my “Gabby Garmin” lead me through small towns with magically pleasant names like Merlin, Wonder and Sunny Valley, Oregon. (I have to train myself to say Ore-gun, not my New Jersey way of pronouncing it Ore-gone). I filled up at a gas station in Merlin, and discovered that self-serve is not allowed in Oregon, only full service pumping. I’m not sure why, but it was nice, and the price seemed about the same as California. The station only had an outhouse in the back, which I reluctantly used. Very full service! 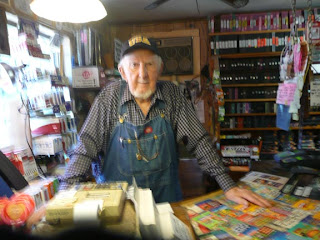 I met Daryl, behind the counter at the Sunny Valley General Store where I stopped for some ice for my cooler. We talked about the South and how he loves sorghum syrup on his pancakes. Sadly, his source for cheap bottles of the stuff was a semi-truck driver who was shot, most likely in a lover’s quarrel, by the boyfriend of the driver’s woman friend. I did not have time to visit the local Museum of the Applegate Trail, which Daryl said rivaled the Oregon Trail in the mid-1800's before the Northern-Pacific railroad came through, and made the wagon trails obsolete.
http://www.rogueweb.com/interpretive/
Posted by Cecelia Kane at 2:54 PM