DAY 11_PEACHAM TO PORTLAND_MADE IT!

Dearest Readers,
Ta-Da! After a final fill-up in Pendleton Oregon, I arrived in Portland at last, driving yesterday into town in a driving rain. I'm still in bed today at 10:30....I need the rest.

Here are two final photos. one of  me with my daughter, Ayla (Joel is taking the picture) and one of my grandson Henry and I in my new apartment...a former 2-car garage converted beautifully into my new place.

Thanks to all for coming along for the ride!
Posted by Cecelia Kane at 1:40 PM 1 comment: 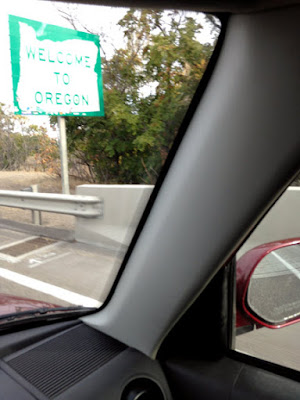 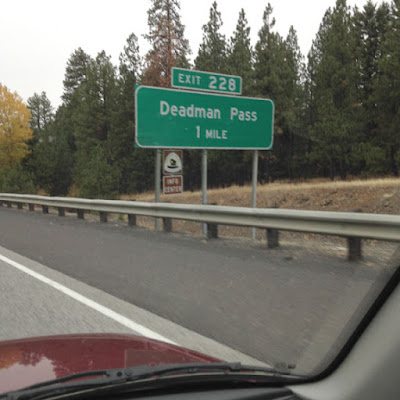 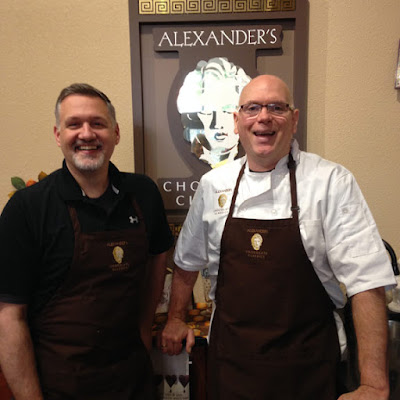 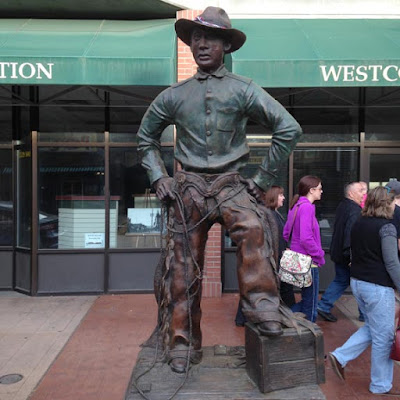 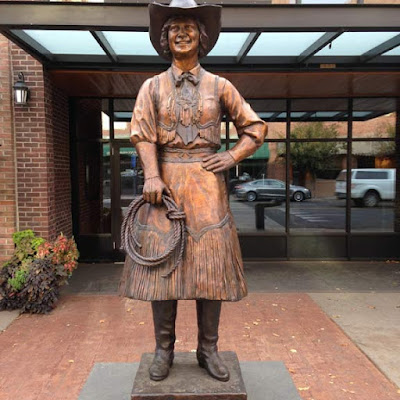 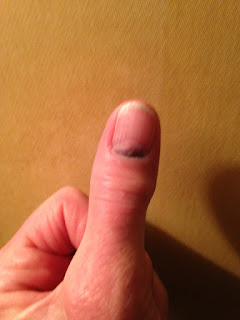 This is Wai again, the hairy green frog creature temporarily loaned to me by Becky Jensen at the Peacham Library. Wai means water in the Maori language of New Zealand, I’m told, where he began his traveling life. He and my arm are stretched out by a northern bay of the Great Salt Lake near Willard, UT. Promontory Point juts out in the far distance behind us, blocking the larger view of the lake.

Goodbye to the great Ogden Mountain God with a frost in the morning air. 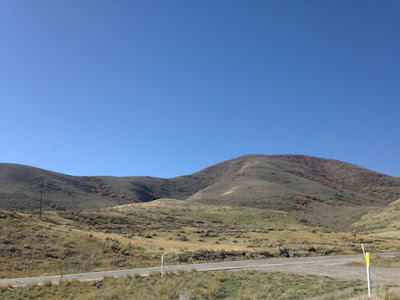 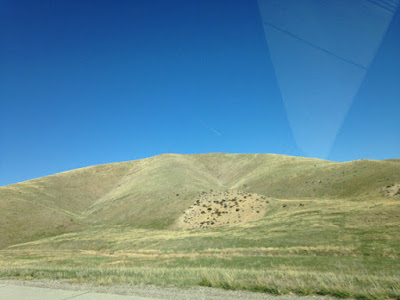 mountain passes with no services: 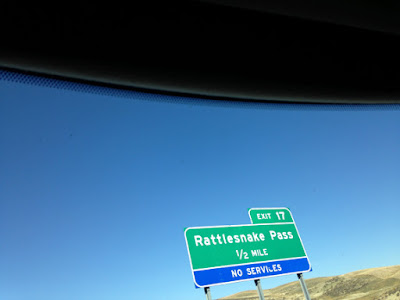 Luckily there were no deer yesterday and the day was sunny and mild.
Idaho has its own Hulk of a Mountain Being flaunting its size and beauty on the desert floor:

but the dry surroundings flattened out again, and were planted with corn and crops with the help of lots of irrigation I’m sure:
My friends the Rocky Mountains rose again on the horizon as I pulled into Boise: 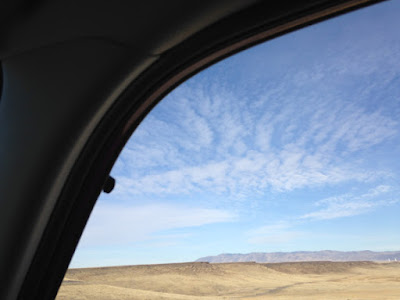 On to Pendleton, Oregon today, my last 300 mile stopping point before the final jaunt to Portland tomorrow on Sunday, October 25th.  Is it possible that this inspirational trip is nearly over?

Posted by Cecelia Kane at 10:41 AM No comments:

8 am Mountain Time. Beautiful Ogden Utah
Spectacular desert journey yesterday from Rawlins Wyoming to Ogden Utah.  I’m in the thick of the Rockies in all their stark awesome beauty now. The mountains rise up like giants erupting right behind the city. The desert terrain adds to the rocky alien splendor for me. I’m used to thick stands of mountain-loving hardwoods and tall pines . There are almost no “normal-sized” trees in the desert I passed through.
At a rest stop a nature sign described the sagebrush as “Mama Sage”.  There are 13 varieties of this hardy plant that can survive on less than 6 inches of annual precipitation. It provides food and shelter for 150 desert species from wild horses to antelope, jackrabbits, tiny rodents, reptiles, birds, and insects.

I crossed the Continental Divide twice in Wyoming at 7,000 and 6,900 feet elevations, then dove down into the wide open desert basin with its infinite stretches of earth and sky. I decided to enjoy the ride, and the imposing mountains up ahead along the horizon. I gave up trying to do the 80 mph official speed limit. The Scion toaster car was struggling to get up the mountains loaded like she is. I rolled along at 60-65 mph letting the trucks and cars sail past me.There wasn't much traffic. 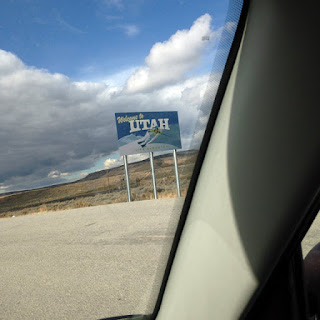 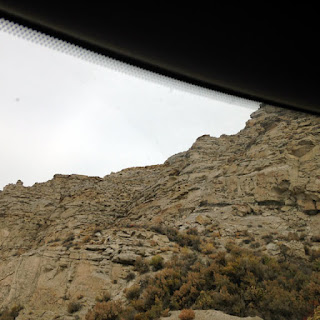 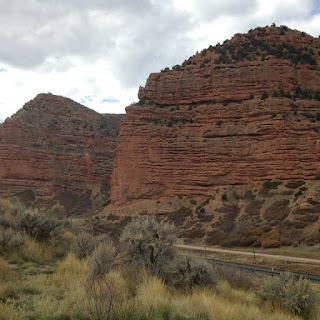 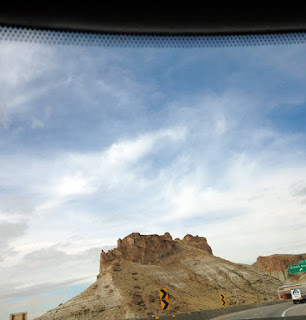 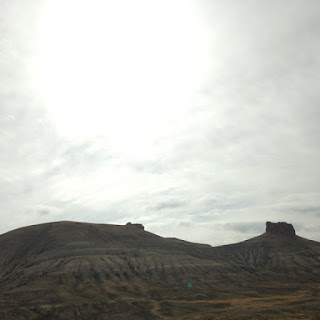 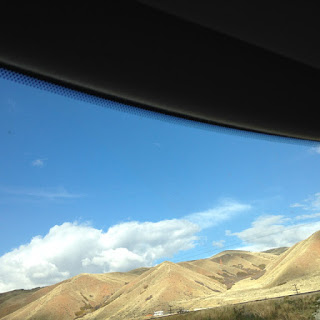 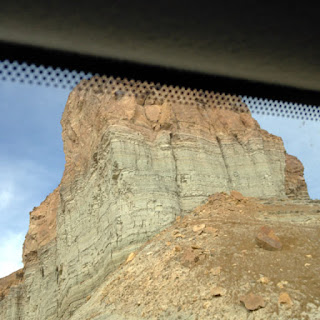 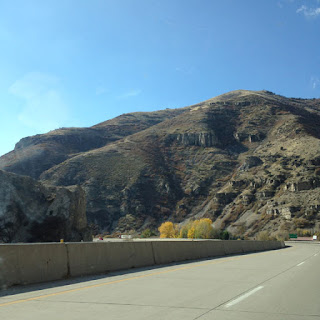 I left old man I-80 West around Ogden and will continue west and north on I-84.
My cross-country trip has been a delightful process of dramatizing a new phase of my life.
Posted by Cecelia Kane at 10:20 AM No comments:

8 am Mountain Time.  32 degrees and foggy in Rawlins WY. I-80 rolls on outside my hotel window, with its armadas of 18-wheelers.
Yesterday I started my trek through the Rockies at 80 mph (the state speed limit)! No more Great Plains.


I’m in Rawlins, a mining town (Uranium and red iron ore) and petroleum. 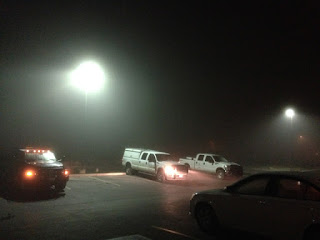 Lots of engineers and mechanical men in white pickups with painted company signs on the doors are staying here at the Pronghorn Inn. I asked one man this morning what work they do, and he said “in the oil fields”. These guys are ruddy faced and mostly burly…some with longish hair. They carried hard hats and wore jackets and boots smeared with dried mud. They are called roustabouts I think. Their work looks hard and very physical. No one smiled during the free breakfast, but they talked a lot.

Downtown Rawlins seems nice...it's been revitalized against the usual sprawl of fast food, chain stores and hotels near I-80. Etta and I checked it out.


I found this bejeweled skull earring INSIDE my car yesterday when leaving Ogallala, Nebraska. How in the world? Perhaps outside Marguerita’s Mexican restaurant someone had the urge to toss it on my driver’s seat. I had the windows open a bit while Etta sat inside, probably wagging her tail at the intruder. I’ll consider it "a her" who will be my ironic good omen.

Posted by Cecelia Kane at 10:35 AM No comments: