Dearest Readers,
My method for art making has been a sculptural whacking away at layers of text, or flowers, or paint. In the case of the painting above entitled “Night Wings”, the final as you see it on top, once looked like the painting below it. If you remember, I covered the poor thing in a layer of bright pink, then turquoise, then black again, then white (see the third image below) and then returned to the black wing-force shape and the green-blue night sky. Even though I added layers, I was actually circling back again and again to a bolder, richer place than the original “final”. It was a circuitous way to return to a place of minimal color, but hopefully greater depth and fullness.
This week’s Ikebana began with two arrangements I did for the Shambhala Meditation Center in Decatur. Unfortunately, I did not analyse the shrine room first, and created two pieces that seem too tall and "leggy" for the already busy altar. Too much is going on here decoratively, and I did not follow my rule to “Whack Away”. I did have fun creating them, so perhaps I am being too self-critical.
Yesterday I made two Ikebana arrangements for my home, which soothed my brain and satisfied my need to clip away at superfluous elements. I also broke down and purchased some flowers. What a treat!
You can follow me on Twitter @ceceliakane if you like haiku-ish poetry. I try to do one a day. I love Twitter’s way of forcing me to cut the crap, and get to the bone of the poem...perfect for my liberty-taking, thin-as-a-wisp haiku. Here’s one from this week:

A forsythia bush is undecided.
Greenish-brown stems try out small yellow ideas.
-2-15-2013
I’ll end this Whack-Whack wackiness with the complete current draft of “The Interstice”, the story I've serialized in past blogs of the old woman who tries out death, but realizes she is not ready.
I’ve hacked away about 45% of the verbiage and put it into prose format. It’s still a bumpy ride, but mostly good. I’ll return to her when some time and distance gives me fresh eyes and ears.Thanks for going through the process with me. Any input?
The Interstice
The old woman slipped out her back door and stood silently on the concrete stoop. Overhead, a circuit board of constellations and passing planes flickered in the depths of the moonlit sky. She leaned over the metal pipe railing and grabbed the end of a sparkling black string that dangled from a star. She reached for another, tied them together in a square knot, and gingerly sat down on the swing she had created. She gripped the strings firmly, bent her knees, and took some cautious leaps like a baby in a Jolly Jumper. The contraption began to rise through a swaying sea of star strings that tickled her face and stroked her body.

The old woman was both frightened and elated as the city spread out below her dangling legs. Illuminated pools circled streetlamps and defined the paths of silent cars. She rose higher.
It was cold, but manageable if she breathed deeply, and relaxed her eyes and mouth. This maneuver stopped the shivering, and allowed her the courage to glance from side to side and below her feet. Her city was gone, swallowed by infinite depths of navy blue. All around her, space was awash in bobbing, babbling string riders gliding in a weightless cosmic sound garden, spitting alphabets of moods that clogged the heavens with three-dimensional feelings. HAPPY, BORED, CALM, MOROSE, RELAXED, NERVOUS, WISTFUL, SAD, PLEASANT. The emotions had spin, attraction and an internal drive that shot the letters like broken teeth out into the universe, clumping together in nimbus globs of granular grunts or resounding glee. She was bumped and jostled by the bobbers and their mood projectiles, yet the people on the strings did not themselves embody these sentiments. No frowns or smiles or nods of recognition greeted the old woman. She was trapped in dead air, constantly colliding with the deadpan dead in a cosmic landscape of straight-faced feelings and zero joy. It was time to find another way.

The old woman pumped her legs and flapped her elbows like a heavenly hen frantically treading the atmosphere. She pedaled and pumped in stationary circles and arcs, losing energy with each failed attempt at escape. Cold and crying, she gave up hope, and released her grip on the strings. She fell backwards, eyes closed, with her arms stretched wide, surrendering to the night. Her body drifted from her swing and away from the dispassionate string riders.

Inhaling deeply, exhaling rhythmically, the old woman floated for a while, then caught a sudden downdraft. She twirled within a funnel-shaped breeze, descending centripetally into warmth and bluer sky. She rolled and relaxed with the swirling wind, arms still open, but righting herself, feet together now like a mortal divining rod anticipating earth.

The city twinkled below, emerging into dawn. Moving lights inched along with linear purpose. Her heart leapt. Street lamps and rooftops grew larger until at last the old woman landed gently, feet first on her concrete stoop. The moon still shone. A few stars blinked. The world twittered with the insistent note of an early bird. The woman sighed, opened her back door and stepped joyfully into the light, and solidity of her lovely kitchen.


Posted by Cecelia Kane at 7:08 PM No comments:

Dearest Readers,
My unconscious theme lately is nighttime and winter. This painting, the Ikebana below, and the last installment of my story of the old woman who grabs a string hanging from a star, all have night as a cause, effect or backdrop. The painting of dark wings above is set inside an evening sky. I like the juxtaposition of low contrast colors and some sort of primeval force. I’ve included the stages I took to get there with some preliminary studies on paper that I did last summer in Vermont.
Fortunately, or unfortunately I did not stop with the dark painting at the top, but dove in and repainted it in order to add more layers of undercolor. The last version at the bottom is unfinished. I hope I haven’t gone too far in slathering on these Barbie colors, but the piece is still unfolding back into the night. Here's what I did...
The Ikebana arrangement below is a product of what I can scrounge from my cityscape these days---a handful of evergreen sprigs, two thin, thorny branches from a barren bush, and a still-living fatsia leaf from an arrangement I made last Fall. I’m ready for color and Spring!
I realized today that the draft of the Interstice story that ends today is the tale of an old woman who tries out death, but the universe is not ready. I thought I’d make a modernist ending and leave her stranded, but in the end I opted for joy. Here it is without any editing....

The old woman pumped her legs and flapped her elbows
Like a cosmic duck frantically treading the sky.
She was able to affect some distance from
The rising tribes of cloudy emotions
But it was a momentary success.
Tied by her string swing to the stars
She pedaled and pumped in circles.
She was desperate and afraid,
Losing precious energy with each attempt at escape.

Cold and crying, she gave up hope,
Released her grip from the strings,
And surrendered to the night.
She fell backwards, eyes closed, with her arms stretched wide.
Her legs slipped from the string harness.

She was free,
Breathing deeply and rhythmically,
Floating for a while,
Then caught in a current of air
That drew her down
Inside gravity’s familiar pull.

She twirled calmly within a funnel-shaped breeze,
Descending gradually, centripetally into warmth and bluer sky.
She rolled and relaxed with the swirling wind
Arms still open, but righting herself,
Feet together now anticipating earth.
A city twinkled below emerging into dawn.
Moving lights inched along with linear purpose.
Her heart leapt.
Street lamps and rooftops grew larger
Until at last the old woman landed gently, feet first
On her concrete stoop.

The moon still shone. A few stars blinked.
The world twittered with the insistent note of
An early bird.
The woman sighed, opened her back door and stepped
Joyfully into the light, warmth and solidity
Of her little kitchen.
Posted by Cecelia Kane at 4:25 PM 1 comment:

Once again it seems some are not receiving a notice of my blog in their email. Apologies for double posting. 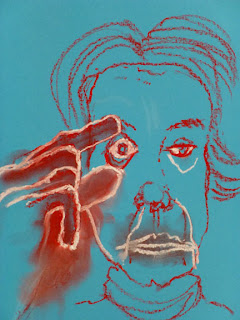 Cecelia
Posted by Cecelia Kane at 4:29 PM No comments: