In Praise of Color, Rust and Exuberance


Dearest Readers,
On Sept. 19th I explored the galleries of one street in the Chelsea Art District of Manhattan. I walked along e. 24th from 10th to 11th Streets, crossed to the south side and walked back to 10th, strolling in and out of galleries on both sides. It took about two hours. I photographed my favorite pieces and will share them here. I found them robustly inspirational. Almost all are marked by an exuberance of color, courage, paint application, and joie de vivre.


Posted by Cecelia Kane at 5:57 PM No comments:

SETTLING IN WITH IKEBANA

Misty today, but a balmy 70˚. Mockingbird runs through her songbook outside my open window. A chipping sparrow relentlessly whittles away. 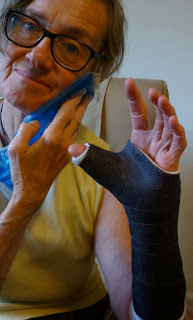 I’m banged up, but finally getting back to blogging and to my life in GA after a summer in VT and a long drive home. I’m icing my jaw today after periodontal surgery, and sporting a semi-immobilizing cast on my left arm after a fall on the sidewalk in Brooklyn last month that also cracked my knee-cap. Life is doable, but clumsy.

I made two ikebana arrangements this weekend from the remnants of foliage and flowers around my condo complex. It felt good to be creative. Please note that I take some liberties with the rules of Ikebana. I usually am sure to include the three main plant elements that represent heaven, earth and humanity, and the small guys called “helpers” , but I play around with the stem angles, often adjusting the recommended degree of tilt in favor of an inner sense of equilibrium.

I’ve also included a selection of woodland ikebanas I created in Vermont. Some you’ve already seen in previous blogs. The plants I used grew wild along the forested roadsides in a Northeastern region of the state that is moderately mountainous, damp and often dimly lit. Some flowers are invasives, like the Queen Anne’s Lace in the piece called Evening Ikebana, and a few seem to be runaway outcroppings of vegetation from nearby landscaping, like the thorny rosehips from a seed that found a patch of extended sunlight. That’s my guess.