“We don’t see things as they are; we see them as we are”  -The Talmud
Dearest Readers,
Recently, I listened to an American journalist in Havana assessing the mood of that country after the death of Fidel Castro. She spoke of a mix of sadness and nonchalance among those she interviewed, and the sorry state of the country’s economy. Amazingly, the interviewer shared an observation that Cuban farmers in the rural areas, despite their poverty, exuded a remarkable tranquility (her word). She left it at that without any further elaboration. Tranquility! I couldn’t remember ever hearing that word used on the news. It seeped into my brain and my bones.

Each morning I sit in a cushioned kitchen chair for a few minutes, and stare out my
bedroom window through a patch of congealed vapor at the trees below (I’m on a hill), and at the vastness of the sky scribbled with clouds. I meditate a bit, and then I recite a decade of the rosary adjusted for my intentions of the day. A decade is a grouping of 10 beads for 10 Hail Marys, and one large bead for an Our Father and a Glory Be. I pepper the prayers with more secular words, and good wishes for my three kids, six grandkids, and future generations, with special thanks to my parents and grandparents who got me here.
I begin my day with the pleasures of reading in bed while drinking my one half-caff coffee, feeling Etta James’ little body curled next to my legs, and in due time, rubbing her belly when she rolls over with paws curled in begging position. A good start. 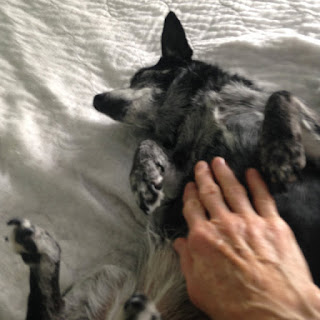 I’ve discovered that tranquility implies timelessness. Its serenity depends on patience and the willingness to bend to a situation. There’s humility and selflessness inside it too. As soon as I seek to seek tranquility a contradictory itch is released in my mind and body that strives for the goal of relaxation. This is indeed the conundrum of thinking too hard, when tranquility just is. You know it when you see it.

Being tranquil is hard to do in our speedy world. I have an advantage in this search. I’m retired, I limit my “to-do’s” and I paint when I want to. I volunteer occasionally,  see friends and find that I can voice my opinions easily.
Having the responsibility of raising kids, or a job with deadlines, driving in traffic, or being on time are not so important now-a-days. I don’t need to control so many things. My daily walks are like praying, by imbibing calmness with the sun, snow and air. Simple stuff.

Last month Becky Jensen, the director of our Peacham Library filled a display case with books on kindness and character as an antidote to the lack of civil dialog during the presidential campaign. I’m reading one of them–The Wisdom of Donkeys, by Andy Merrifield, with the subhead, Finding Tranquility in a Chaotic World. He wrote it in 2006.

Andy is an x-New York City writer of newspaper and magazine opinion articles who escaped the chaos, (his description) and now lives and writes in the rural Auvergne district of France. The book recounts a summer journey he took on foot up and down the forest and village paths of that area, leading Gribouille, a gentle, soft-eyed donkey, who carried his gear. It seems donkeys are masters of the art of tranquility. You cannot force one to rush or to proceed when it senses danger. They are patient and all-suffering. Merrifield moved at Gribouille’s pace, talked to passers-by, sat with his coffee at outdoor cafes while his companion nibbled quietly near a hitching post. It was life-changing.

I have tranquility sometimes, more than in the past, but it’s not the norm. I can’t say I’ve “reached” it yet. (There’s that oxymoronical “itch” again.) Tranquility can’t be a goal, I think. It’s just is a simple state of being. Ahhhh

“The essential is invisible to the eyes.”  -the fox in Saint-Exupery’s The Little Prince
Posted by Cecelia Kane at 12:20 PM 1 comment: