BURNING DOWN THE HOUSE 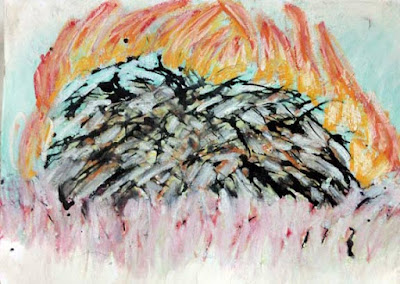 I’m done. I’ve lost my fire for building my stick hut-in-the field. She (may I call her she?) sits in the yard like a spiny tumor taunting me to finish, when I truthfully just want to get back to painting. My mother would say, ”Your eyes are bigger than your stomach”, an adage that means, I’ve bitten off more than I can chew. Most days Miss Hut is intractable and irascible. She is not an easy girl to deal with. She’s gnarly and spiky at this point and not very beautiful. She needs a lot more work, trimming and filling in.
The only time I like her is when Etta and I crawl inside her protective womb.

I’ve reached a point in my figure-it-out construction style, where I need to saw limbs for pieces to fit. This has irritated an old rotator cuff issue, and like me, the hut has developed a stoop to her back.

The maple seedlings I used as roof supports last fall did not bend symmetrically front to back. 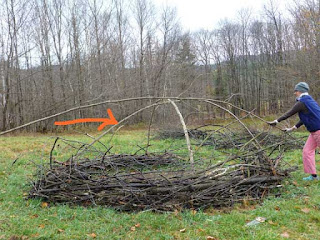 So, I’ve reduced the curve of the rear baseline, and brought it in closer to the center. 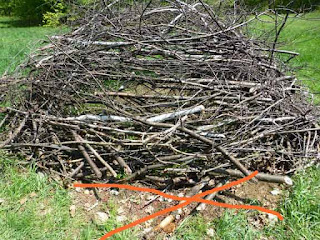 Despite all the yanking out of intertwined sticks, I’m glad I corrected that. She is more shapely now.
The hut has turned into a metaphor for my body and soul.
She is teaching me the limits imposed by aging, and quickly dispels any hubris I had regarding my environmental sculptural prowess. I was looking to repeat the accomplishment I felt in digging the Mother Hole back in 2012 at The Carving Studio and Sculpture Center in West Rutland Vermont. It was spiritually a perfect piece.

Located just four miles from the burial place of my Civil War ancestors, the hole fit my full body standing up. I dug, descended, and resurrected back out on a hand-made ladder. I created a cylinder of marble-lined emptiness that was “full of fullness”, to ask my mother about the nature of death.

I’m reminded of a day in 1996 around the time I turned fifty. Two young women approached me in Aurora Coffee Shop in Little Five Points, in Atlanta, and said hi! I looked at them quizzically, and they reminded me we had spoken at a recent art opening. I had no remembrance of their names or their faces. I was shocked at this mind gap. It happens regularly now. Back then it felt like a little turning point, where a window in my consciousness opened and some birdlike definition of an invincible self flew out without a word of goodbye. She seemed confused, landed on a bush, then quickly took wing, disappearing into the clouds.  Another little bird has left the premises. This one is the bird of a strong body. 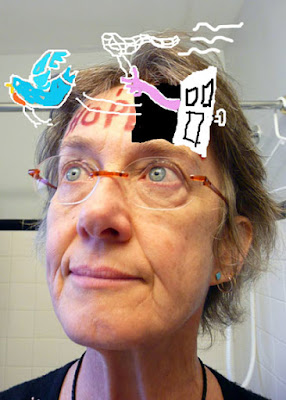 
I’ve turned my hut over to friend and landlady, Cynther, who lives below me, and who plans on covering the hut in morning glory vines, creating a blue poof in the field. I like that image.  Better than being incinerated as a burn pile. 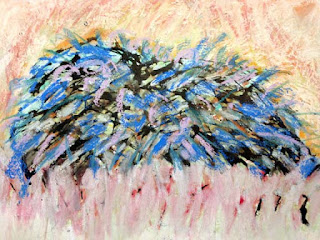 Last Saturday morning I volunteered to pick up litter along a two-lane paved road that runs through Peacham, Vermont, called the Bayley-Hazen road, originally a military highway built up to the Canadian border during the American Revolution.

It was Green Up Day in the state. My dog Etta James and I walked 1-1/2 miles along one shoulder and returned to my parked car along the opposite side for another mile and a half. We probably walked five miles altogether. Most of the junk tossed from cars had landed off the shoulder and came to rest in fields and down slight embankments. So I scurried down, then plodded back up, again and again. Etta was sick of it after a half-mile, and pulled back constantly. Mistake to have taken her.

I did not take pictures because my hands were gloved and covered in stinky stuff. I had a trash bag in one hand and Etta's leash in the other. So, I’ve created a gallery of drawings of the top ten most popular object-projectiles.

1.   Number one is Bud Light in mangled cans…far and away the top tossed trash. (See above) 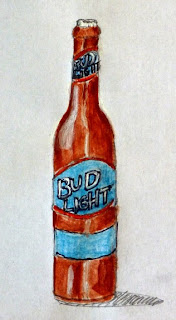 2.  Number two is Bud Light in bottles. I learned to empty all liquid to lighten the load. 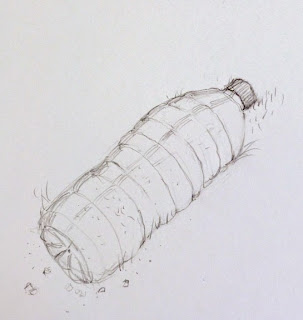 3.  Number three is an assortment of water and soda bottles. 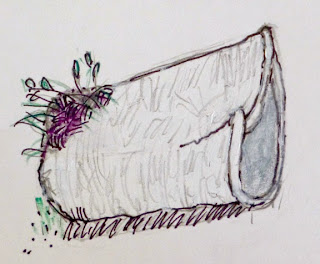 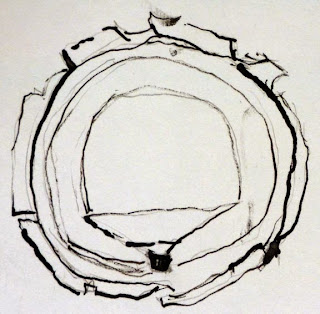 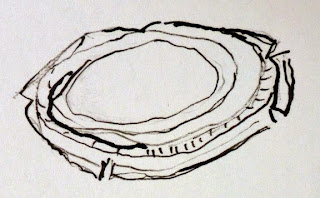 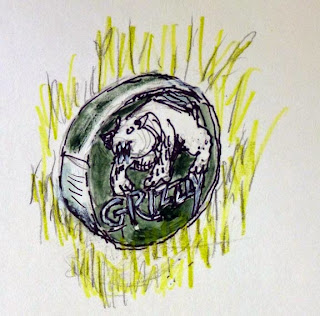 5.   Round chewing tobacco tins, often flattened and resting with or without their lids. 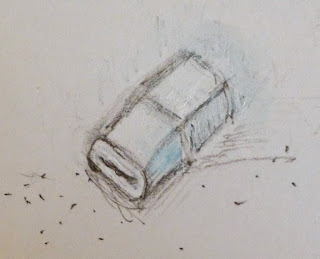 6.     Number six is the little white plastic mouth-pieces from some sort of small cigar or cigarette. Cigarette butts were everywhere too, but after a while my back refused to bend down to retrieve them. 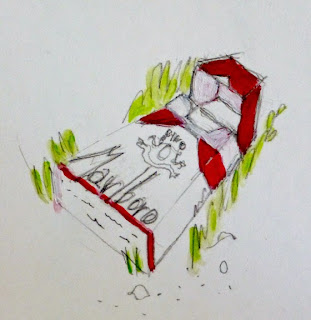 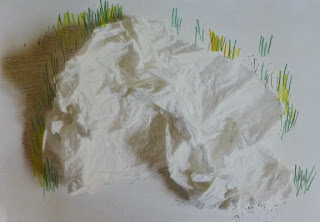 8.  Eight is crumpled paper napkins melting back to bleached cellulose. 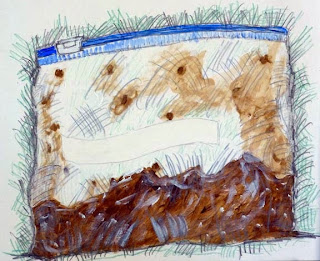 9.   Zip-Lock baggies filled with anonymous rotting food or mysterious substances. You do not want to unzip them! 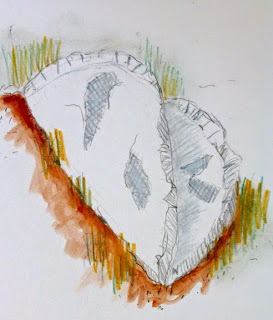 10.   Crumpled paper plates with grease stains from pizza or something else.

I was surprised to find only a few chips bags, but I encountered
One wild windshield wiper,
A partially buried shirt,
A plastic tarp in a heap,
A rusting space heater that I could not pick up, and
A dog skull and bones. Poor thing landed in some bushes down an embankment. I left his remains in peace.

All this got me thinking and questioning,  “Who is lobbing this stuff into the landscape and why are we so addicted? The litter is mostly the packaging around our cravings for sweets, caffeine, alcohol, and nicotine–the containers for ingestibles.

An Atlanta artist and friend, Susie Winton makes art from small things that are thrown out, overlooked or not considered important. See her artwork here. Susie says, “I use common materials and the found object to refocus, to better see the world around me and the life I live”.  I see her work as also being about the experience of aging. Susie is like an urban archaeologist, finding traces of life in the detritus that gets left behind.

Green up Day is like that too. More than a good deed to beautify the scenery, picking up waste is a study in what is both important and not important in the culture at large, and how we view our place on the land.
Posted by Cecelia Kane at 2:18 PM 2 comments: