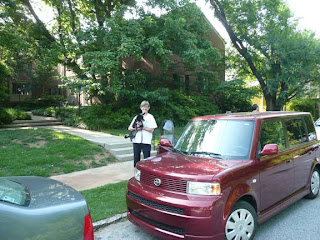 Dear Readers,
Left Atlanta around 9:30 am yesterday. Ruth Schowalter and Tony Martin sent Etta and I off with pictures and hugs. Going to be a hot one. Stopped a lot on the way adjusting the little Scion's load. I call her the "Toaster". I thought the GPS was broken because it said I'd get to Opelika in about an hour. Forgot about the change to Central Time. 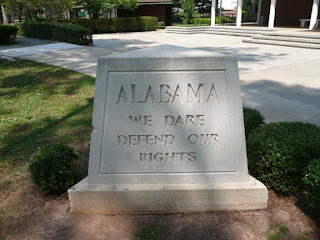 Entered Alabama late morning...already steamy- Felt like Charleston weather. Greeted by truly cheerful Alabamans in the Welcome Center despite the defensive message on the sculpture outside on the lawn.

Delivered Barb Bondy's little girl dress gloves to her house in the historic section of Opelika. She was teaching at Auburn when I arrived, and could not be at home to meet me. 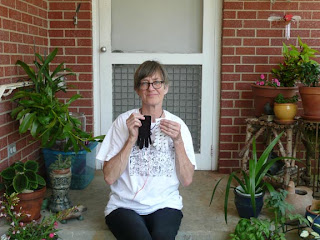 One of the gloves I'm holding has long trails of stitched red threads running through it and the other is multi printed in a swarm of helicopters. I'm surrounded by her garden of potted plants and flowers.

Lunch by the roadside (Thanks to Mary Alma Durrett for making me a Tupperware care package of foods for the road and chunks of watermelon from neighbor Anne Nicholson), then on to Birmingham by 2:30 to meet John Fields at Crestwood Coffee. Straight, empty blazing road north, but surprizingly hilly. 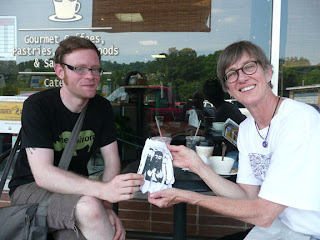 John teaches painting at the University of Alabama Birmingham. We're holding one of his week of gloves from 2008, printed with an image of a friend in a hand-made hood.
It was in the high 90s and toasty outside. Another coffee drinker took our picture.

On to Tuscaloosa to the temporary home of Tom and Charlotte Wegrzynowski and their two beautiful boys Ben and Sam, where I spent the night. Thanks Tom and Charlotte for dinner, breakfast and wonderful conversations about kids, roses, tornados and teaching. Both teach art at the University of Alabama here. 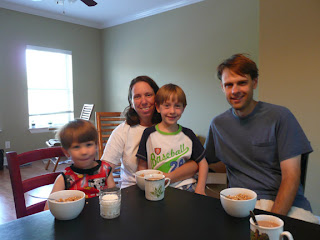 They lost their home during the big tornado in April and are in a condo paid for by the insurance company while they figure out what to do for housing. They all survived inside the destroyed house while trees fell on it. It was 30 seconds of terror. 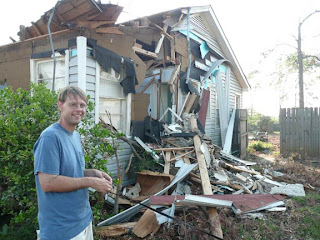 Charlotte is a book artist and a knitter. Below on the right is a wire house with knit form that she made in response. 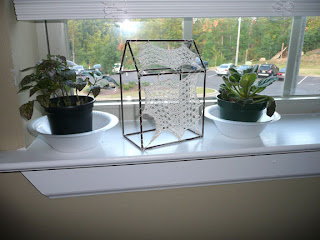 Visited Tom in his studio at the University. He's working on a series of paintings of closeups of fans at sporting events or war scenes from stills he's taken from movies or TV. 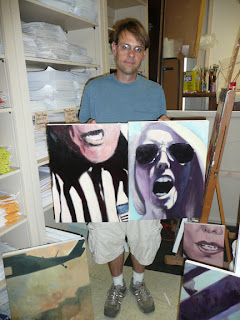 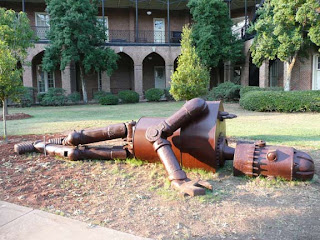 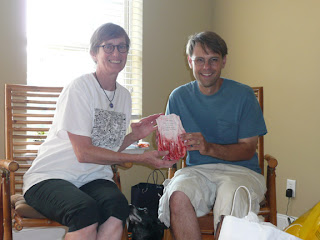 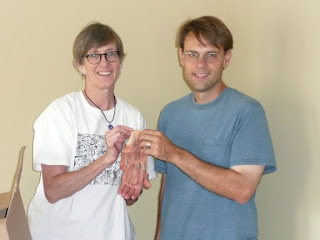 The glorious sprawling "Goldie" the robot reclines in the arts quad at UA.

Finally, back at his condo I formally returned his two weeks of gloves for the Hand to Hand Project. The first set of gessoed, bloodied hands were done in 2008. The second set from 2009 depict drawings of Crusaders on a dyed red painted background. We are surrounded by boxes and bags of their possessions and donated items. Today they await delivery of new furniture to start over again.
Posted by Cecelia Kane at 7:39 AM