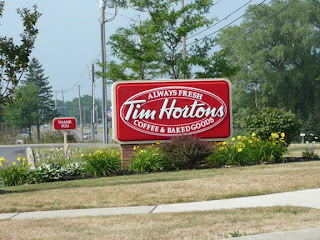 Etta and I (really just me) started the day with a delicious coffee and a muffin at Tim Horton’s in Angola New York, a Dunkin Donuts clone and very poplar in northwestern New York. Howard Salzman, my camp buddy from Buffalo couldn’t believe I’d never heard of the chain. “They have stores in Boston,” he exclaimed! He was right about the good coffee. I drove five miles in the wrong direction to get a refill. (Silly, happy me). We drove north and then east along i-90, skirting the southern shore of Lake Ontario, until we arrived at the Finger Lakes area southeast of Rochester, NY–just west of Syracuse. 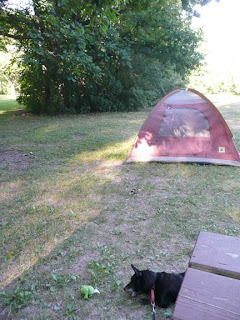 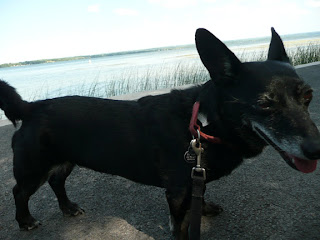 We are now camped on the shores of Lake Cayuga, one of eleven “Finger Lakes”, formed like claw gouges in the earth some 10,000 years ago when glaciers receded from the area. Etta and I strolled along the lakeside, and are now relaxing at our campsite. She’s got her fuzzy green frog (ignoring it), and a new rawhide “bone” to whittle on (enjoying it). She stayed in the car while I sampled some wine at Montezuma Winery nearby. 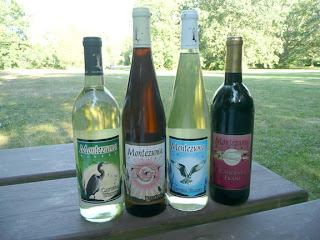 I bought a few bottles to share with friends and family. The crew at the wine tasting place were not too friendly, so no pictures of them. 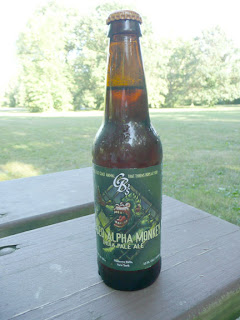 I’m also sampling at my picnic table a local IPA called “Caged Alpha Monkey”, with the subhead, “A Big, Bold, East Coast Animal That Throws Hops At You.” It’s made by Custom Brew Crafters of Honeoye, NY. Sorry, chimp, it’s too bold and “hoppy” for my taste. I’ll finish it, but I’m holding my nose! 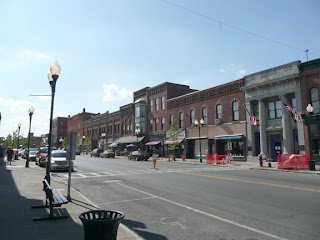 After setting up the tent, Etta and I toured historic Seneca Falls NY founded in 1831. The downtown area is a model of well-preserved 19th century storefront architecture. 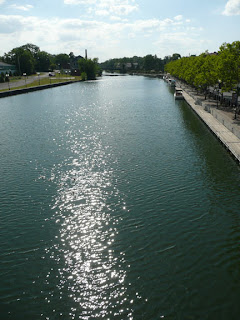 The Erie Canal flows through town, near a now renovated waterfront area with restaurants and shops along the old barge mule path. 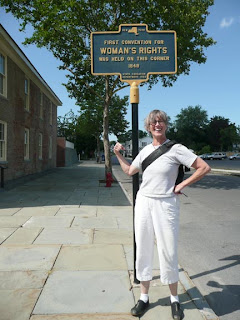 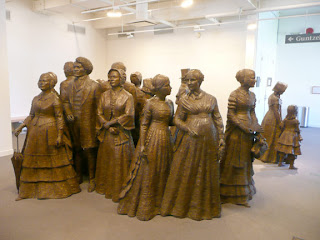 This nearly life-sized bronze sculpture by Lloyd Lillie of twenty of the convention participants dominates the lobby of the Visitor Center. 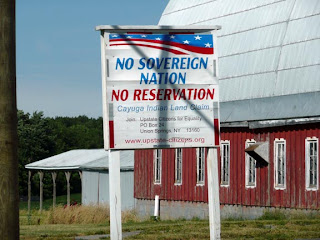 Driving back to the campsite this evening I snapped this picture of a roadside sign about another human rights struggle unfolding today between some area business people, and the Cayuga Indians who appear to be petitioning for a reservation and return of ancestral lands. 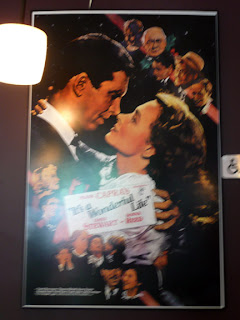 I shot this movie poster in ZuZu'z Cafe, a really good coffee shop downtown. Seneca Falls is where "It's A Wonderful Life" was filmed. How perfect is that for a perfect looking town with a lot of American history.
Posted by Cecelia Kane at 9:30 AM