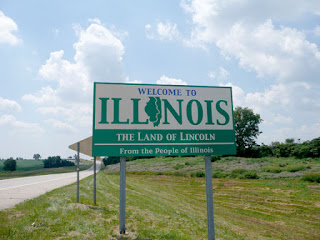 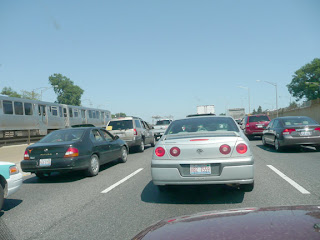 Etta and I are inching our way back East. Yesterday we traveled southeast from Wisconsin across the Illinois border, and down to the windy city of Chicago. Traffic Friday afternoon was a snarly mess on I-90, but I’ll forgive them for it. I learned quickly how to dash and dodge my way into lane changes. The day was actually breezy, sunny and dry...the place to be in the summer with festivals of all kinds happening in the neighborhoods. There’s a Burger Fest going on now in the Roscoe Village area where I’m staying two nights with Vince Whitlock, a Shambhala Buddhist friend of former Atlanta artist Rhonda Reno, and poet/musician Debbie Hiers. A Roots-Folk festival is taking place this weekend in Rhonda and Deb’s Lincoln Square section of town. Today they took part in a 5K run and tour of Chicago's famous disaster sites. 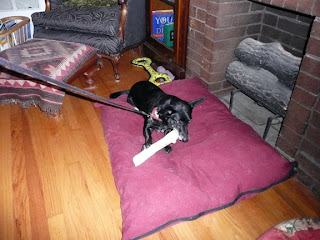 I’m here for two days. Etta, by the way is in seventh heaven with a big rolled rawhide bone that Debbie gave her. Etta even ignored their cats in favor of maligning the big “bone”. I’ll remember that. 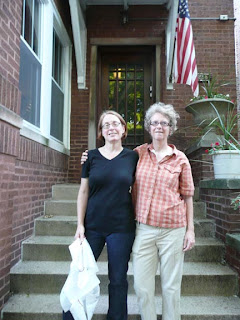 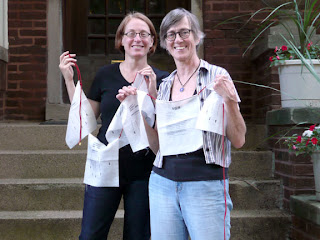 This is Rhonda and Debbie in front of their house, plus a picture of me returning Rhonda’s Hand to Hand Iraq War prayer /surrender flags with printed hands. We're on the steps of her home in the Lincoln Square section of Chicago. One flag records her conversation with a frustrated soldier, John Francis, seated next to her on a plane. He was off to Iraq for his third tour in August last year, when combat troops were supposed to be pulling out, not going in again. 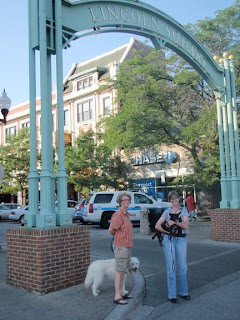 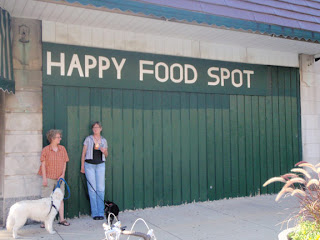 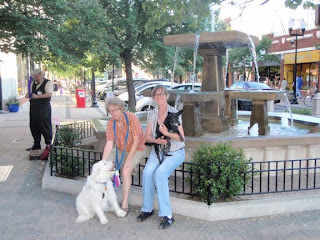 Later we walked their dog Trixie, and Miss Etta around the neighborhood park, shops and eateries. 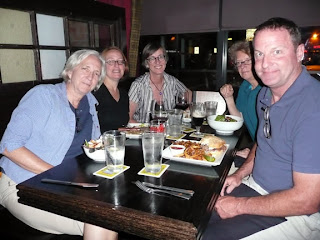 We had dinner at a Lincoln Square brewpub called The Fountainhead to celebrate Rhonda’s promotion and raise at her marketing company. Left to right we are: Celeste a friend from Atlanta, Rhonda, me, Debbie, and Vince. Thanks for treating, Rhonda! 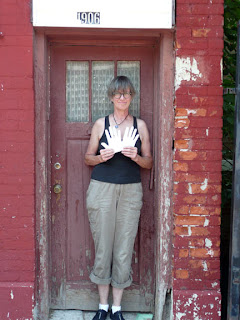 Today is Saturday. I drove into South Chicago to deliver Patrick Holbrook’s paper hands for his six Iraq War dates in 2006. They are printed in ASCII code for each news story and picture. He could not be at home today, so I slipped them under his door. It looks like he lives in an artist/warehouse area. 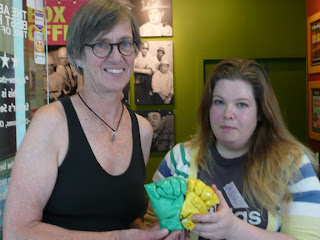 Next stop was downtown Chicago and the comedy club, Second City, where the Hand to Hand artist Kathleen Rapp works. She accepted her first week of six gloves from 2007. They spell out "Help Me" in American Sign Language. We're standing near the box office to that famous improv club. 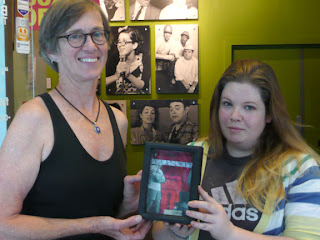 Then I formally returned her six small vignette shadowboxes with miniature gloves inside, depicting a collaged war story for each day. We're again standing at the entrance to Second City. 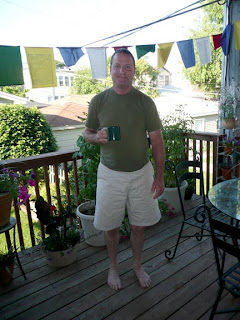 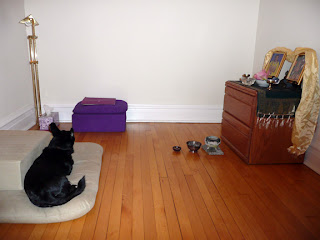 Etta and I are now relaxing. We’re staying at Vince Whitlock and his wife Barbara’s house in the Roscoe Village neighborhood, not far from Rhonda and Debbie. Both areas are an eclectic mix of early 20th century residential architecture with alleyways and private backyards. This is Vince on his sunny deck in front of Tibetan prayer flags and pots of fat tomato plants. I snuck this final picture of Etta in Vince and Barbara’s Buddhist library, altar and meditation space.
Posted by Cecelia Kane at 6:22 PM