The water for which we may have to look
In summertime with a witching-wand,
In every wheelrut’s now a brook,
In every print of a hoof a pond.
Be glad of water, but don’t forget
The lurking frost in the earth beneath
That will steal forth after the sun is set
And show on the water its crystal teeth.


I'm resending this blog. Only two photos published the last time. Apologies in advance if the same thing occurs.

Mud Season has arrived in Peacham, Vermont. Freezing nights and thawing days sends the sap running through the maple trees. Snow banks are melting. Spring is in motion.
Last week, in the midst of our 52nd snowfall, a large patch of “thatch-y brown earth exposed itself on my driveway. Horticulturalist Charlie Nardozzi on Vermont Public Radio advised gardeners to begin pruning crabapple trees, and dig up any buried root vegetables to eat before they go to seed. You can read about his Vermont Garden Journal radio program here.  I’m a walker, not a gardener, but I can feel the excitement in the birdsong and the snowmelt. 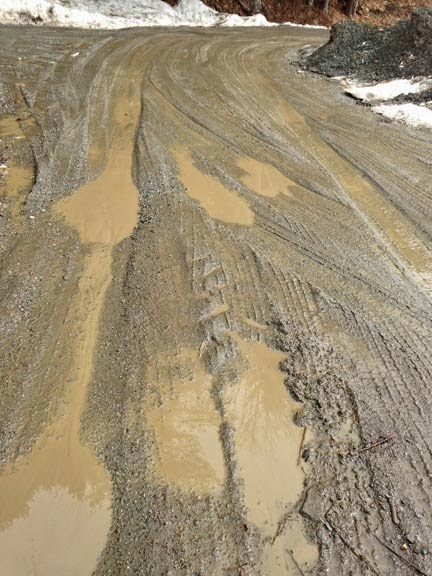 Walkers need to be cautious. Cars can spray mud-pies, but the occasional driver on the dirt roads near my home, slows down and pulls to the side. I move over as well. 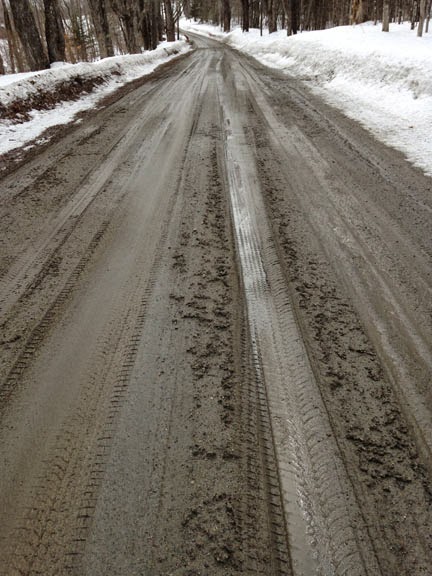 Driving is tricky. My glorious studded snowtires long for some ice and snow to grip their teeth into. Instead, the way is a slippery mess. My rear tires tend to swerve in the slime, and if a tire rolls into a deep rut, the car is pulled along in the direction of the previous driver. This is especially true with truck tracks. I try to ride the ridge of the rut. My 2006 Scion XB is built low and light. My tires are small. If the mud mound is too high in one spot, it could knock an auto part off the bottom of my car. Just before Christmas I lost the oxygen sensor located near my exhaust pipe.  I drove over a chunk of ice that had dropped off the mudflaps of a car ahead of me. Without the sensor, my fuel mix was disrupted, resulting in poor mileage. So in mud season, I drive slowly and carefully until I come to a paved road. So much to learn in a rural wintery environment! I’m told the road mess here will probably continue through much of April because of the depth of the ground frost this year, and the piles of melting snow.

The good news about mud season is it’s maple syrup time! This weekend I checked out the open house at Center Hill Maples’s sugaring operation in Barnet Center, Vermont near me. I was nervous driving into their sugarbush on the one-car-wide, slippery-sloppy road, but I was rewarded by the busy bee atmosphere of the sap collecting, boiling, filtering and bottling of this season’s first run.

Alan Fogg and his wife own and operate this maple farm. They have thousands of trees, and produce about 1,500 gallons of syrup yearly (If I remember correctly). 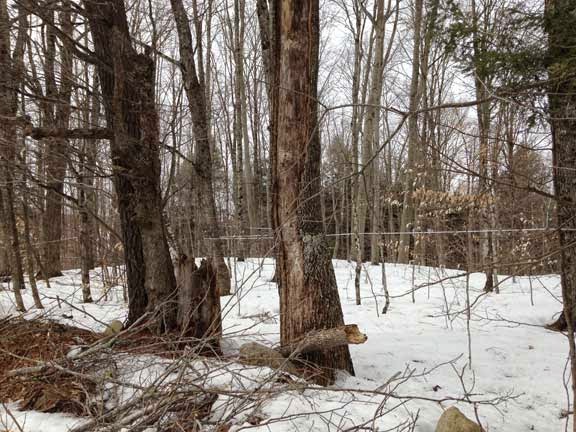 He uses plastic tubing taps instead of the old-fashioned buckets to bring the sap into the sugar shack. You’ll notice the raised cupola on the roof that allows the steam to rise and release out of the building.


Typically 40 gallons of sap makes 1 gallon of syrup. That’s a lot of boiling! The Foggs’ reverse osmosis system speeds up the evaporation.

More mud and sugaring pictures below.