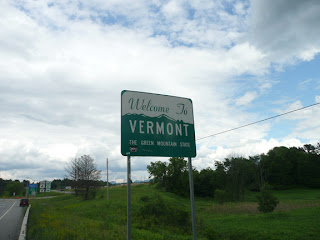 Etta James and I are in Rutland Vermont for a three month summer art encapsulation. We drove up from Decatur at a leisurely pace, stopping to stay with friends Ann and Mike in Raleigh, 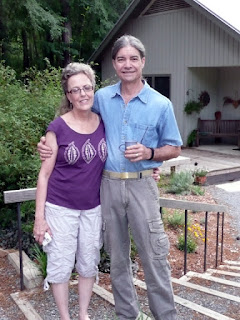 and a week in Brooklyn with my daughter, Semra, her partner Erik, and my three year old grandson Roman.
I’m cacooned in Rutland Vermont in an unfurnished upstairs apartment carved out of the back of a big, brown shingled Victorian home, circa 1890. I’m nestled amid dormers and gables, up a steep, skinny staircase under a massive gambrel roof. I have my own entrance, doorbell and mailbox. It’s old up here, somewhat Spartan, but clean.
Artist friend Michael Beale (beneath my life/death wings),
and Chris and Ellada, the home owners downstairs 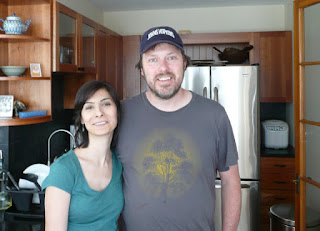 have given me some furniture, a futon, pots/pans, two plates, and two sets of cutlery. I’ve turned the living room (originally a bedroom) into a studio and tarped the floor.
I’m rarin’ to start painting more wings in my series on transformation-enablers, and more self-portraits of those 89 days of recorded feelings on my face from 2010. Here's the latest portrait of feeling cold earlier this week in 40 degree morning weather. (It actually felt good).
There’s also the conundrum to solve this summer of arranging and creating a quilt of the 89 companion hankie portraits. I've arranged and re-arranged them in a variety of ways...not satisfied yet.

Somewhere in the quilt I hope to incorporate a life-sized replica of my Catholic School jumper. That blue gabardine uniform had a tiny breast pocket that was the grammar school’s allowable display-device for these colorful embroidered family handkerchiefs. 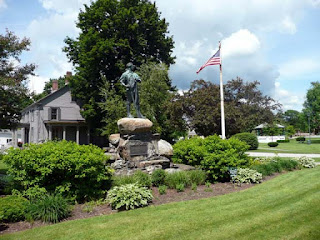 Rutland Vermont is lush after a mild spring and a week of cool rain. The statue of the Revolutionary Green Mountain Boy in Main Street Park hasn’t moved an inch since my childhood here–still overseeing the concerts in the bandstand on the green.
In nearly a week here I've visited cousins Elaine and Moira Flanagan, friends Linda Morgan and Glenn Horgan, and touched base with my web designer Andrew Christie at Café Tera downtown.
I ran into Maryann Belfore, a high school classmate in Price Chopper, and nearly bumped carts with my cousin Mary Margaret Fagan in Hannafords. I signed up for a Rutland Library card and received it in my mailbox two days later. I’m official! 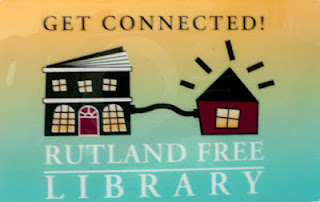 I should mention before closing that I caught a few art shows while in NYC and a five-person spooky/funny contemporary circus from Sweden called Cirkus Cirkor at BAM (Brooklyn Academy of Music). My daughter had tickets. We left early when Roman got too scared, but it was darkly wonderful.
The Cindy Sherman retrospective at MOMA is outstanding. It closes June 11.  I also spent an artistically inspiring afternoon on the odd-numbered side of West 24th Street in Chelsea between 10th and 11th streets cruising the big-name galleries. Metro Pictures featured new work by Cindy Sherman to piggyback with her MOMA show.
Anish Kapoor’s heaps of concrete dollops blew me away at Gladstone,
and Francesco Clemente’s paintings at Mary Boone were quietly spiritual.
These were a few of my favorites.
Posted by Cecelia Kane at 5:03 PM