DREAM BARKING
A mostly cold and dreary week. Overcast with nights near or below freezing.
Dearest Readers,
Cold weather and the short, dark days of winter remind me of hibernation, curling up in bed for as long as possible, and plants without leaves.

Here is a stark winter Ikebana arrangement that a Shaker would love, with seed cases that resemble a nest of bird mouths, and two minimalist branches that rise like twin towers with no need to speak. 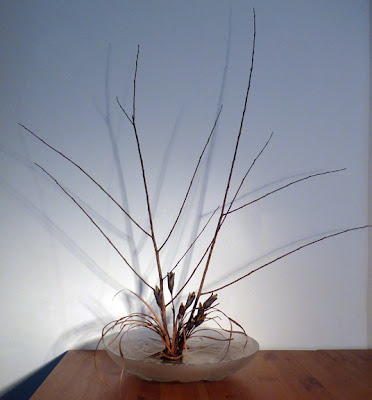 I also revised the lacy, wax burrow from a few weeks ago by adding lines of black and red stitches that run the length of the tunnel and spill over the entrance. It looks less like a condom now, and the stitches relate the piece back to the drawing I used as a starting point. See below. You can click on each image to enlarge.

The story of the old woman who grabbed a star string continues with part 3. I am composing on the fly. There is one last installment after this one, then the mad hacking will begin. The final piece will be carved, honed, and skinnied up to express its essence, I hope...but for now I subject you all to the full verbal assault, and pre-machete word editing of the old woman in the sky.

The Interstice- Part 3 Jan.27 .2013
A fast moving mass of meanness blew the old woman’s way.
This dust devil of bully feelings swirled around her string swing
Flailing her with sandy specs of anger, resentment, aggression and fear.
It screamed out shouts of whirlwind hatred,
Lashing her face and hands,
Then spiraled into deeper space.

A lump of slippery illuminated translucence
Slid across the darkness
Mumbling muffled emotions of sadness and suicide.
It was glaucous, sticky and white.

Traveling slug-like by great extensions of gummy appendages,
It hurled itself forward, and sideways, spreading out and moving on.
Sorrowful sounds moaned beneath this placenta of pain.
Bumps of internal despair, anxiety and uselessness rose to the surface,
Cried, then gave up and disappeared inside the mucous mound.

A gooey arm sprung suddenly from the miserable thing
And wrapped itself
Around the old woman’s neck, shaking her like a dog with a squirrel in its mouth, pulling her towards the mother blob.
Holding tight, the woman bit down hard on the strangling snake.
It yelped, popped and snapped back into its cloud.
The great gummy hulk rose above her swing, and slithered out of sight.
She trembled, gasped, and clutched her strings.

A cumulous formation appeared in the distance, gathering speed and height.
It emitted soulful tunes and pleasantries along its path,
Spewing a confetti of kind words, peace, and compassion.
This happy cloud barreled down on the woman’s position,
An unstoppable bubble of joy, with something tubular rising out of its core.
The sweet sounds became a deafeningly lovable chorus.
Red droplets fell from the ascending, swaying column,
Spraying her in massive balls of blood.
She was drowning in an arterial outburst of heartfelt emotions.
It was time to get away.
To be continued
Posted by Cecelia Kane at 7:33 PM