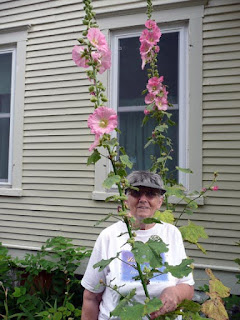 Dearest Readers,
I’ve been walking and painting this week.I stopped by to chat with the current owner of our old family homestead in town. Meet Nancy Jeski next to some of my grandmother's few remaining old hollyhocks. It’s a stalky, leggy flower from another era...perhaps Victorian times.
Etta went to school at 4 PAWS ACADEMY  for one class to curb her separation anxiety. It was really a class for me to understand dog “pack mentality”, their den hierarchy around food, vertical and horizontal space. Retraining her will take some determination.
On the 4th I made a big loop around town hoofing it as the morning misty air lifted. It felt like the beginning of time.
I passed Moon's Brook, gurgling through the lush greenery,
crossed the old Rutland Railroad tracks,
and strode up Gouger Hill past the open door of Christ the King Church.
I ended the day at my neighbor’s house for a cookout on his porch with other neighbors. His kids squealed with sparklers in hand, and tossed little cap-like fireworks that made a snapping sound when they hit the ground. A downpour at 9:45pm probably put a damper on the fireworks display slated to begin at the RutlandFairgrounds right after the Demolition Derby. Hopefully it went on later. Vermont was spared the 100+ heat wave that hovered over the southern and middle parts of the US. With only one box fan in my apartment/studio, I’m grateful that we dodged that bullet.
*I revised my Untitled Wings#2 painting, swirling the skulls and hearts in the force field of the surging wings. I think this is closer to what I wanted to convey in the piece.