Dearest Readers,
I’m in Silver Spring, Maryland at the home of artist friend Kate Kretz. We’re on the back porch eating dinner, talking about our Catholic childhoods and listening to the cicadas ricochet their calls from the pin oaks in the blackness beyond our circle of light. A few dots of starlight prick the cloud cover. Etta scurries at our feet searching for crumbs, barking now and then at a deer or perhaps a fox in the stand of trees. 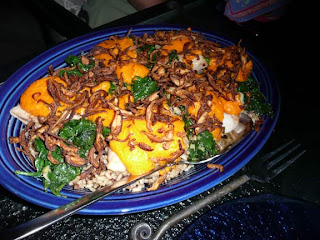 This was the main course...baked cod with carrot puree, ginger spinach, and roasted shitake mushrooms on a bed of brown rice. Wine and cheeses at the start of the feast. Yellow cake with lemon curd filling, and a lavender cream topping. Health to your hands, Kate!

At the start of this day, I kissed my sleeping grandson Roman on the cheek, packed the Scion toaster-car, and drove out of beloved Brooklyn for the road again. And roads plus bridges and tunnels were the extent of the sights on the day’s journey. Verrazano Narrows Bridge, Goethels bridge, Delaware Memorial Bridge, NJ Turnpike, Delaware Turnpike, I-95, Fort McHenry Tunnels, Maryland Turnpike, the DC beltway. 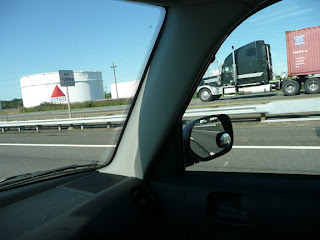 New Jersey greeted my descent from the Goethels Bridge with 18 wheelers and oil refinery pill boxes beside the marshlands. I goofed and sailed through the EZ-Pass toll booth. The trucks would not let me back up, so without a ticket for the NJ Turnpike I had to pay the fee for the entire stretch of highway...$9.05...not too bad.
The Verrazano Bridge alone was $13.00 to cross. 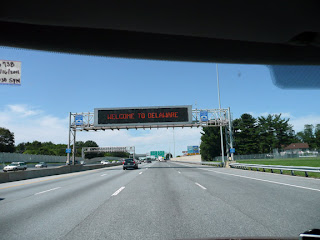 Delaware flashed a digi-dotted welcome sign as I spilled off the Delaware Memorial Bridge at New Castle, surging forward with the tide of fellow cars and trucks. I snapped a quick windshield pic in response. 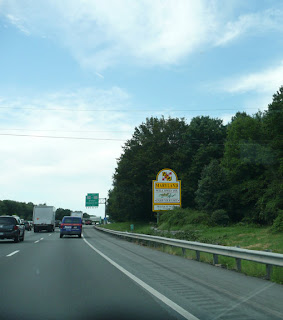 Maryland welcomed me to the beauty of the Chesapeake, with a reminder to keep her clean. The Lumix camera and I recorded this moment as another crossing point on the journey out of Georgia, around America, and now back down toward home. 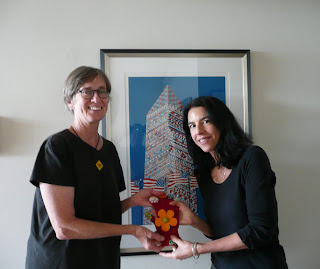 This is Helen Zughaib, a Lebanese artist-refugee who was evacuated from her country in the mid-1970s during the civil wars. I am in her home and studio in the Columbia Plaza Apartments in Washington, DC near Watergate. From her sixth floor balcony we can see the Kennedy Center for the Performing Arts across the street, and a bend of the Potomac running full and green two days after Hurricane Irene.

I’m handing Helen one of her six flowered gloves from the Hand to Hand Project, referencing the Bush administration’s early claim that the citizens of Iraq would welcome the American troops with garlands of flowers. We are standing in front of her gouache painting of the Washington Monument. Helen has covered the Memorial in Middle Eastern patterns and positioned a row of American flags at the base. Hillary Clinton gave her George Washington Memorial painting to the King of Morocco. 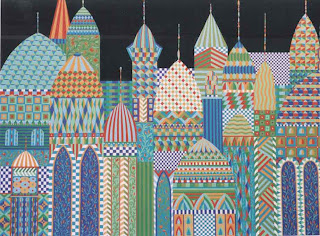 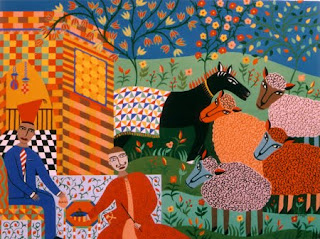 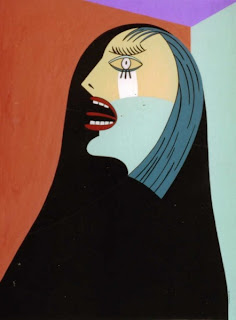 See more of her work such as the "Weeping Women", and “Stories From My Father” series at http://hzughaib.com 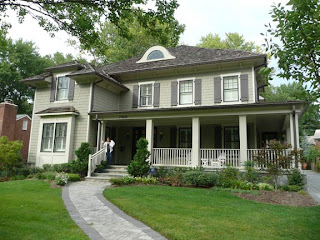 Then on to Bethesda, Maryland to the home of Pam Rogers. She was working on some experimental watercolors on canvas when I arrived. 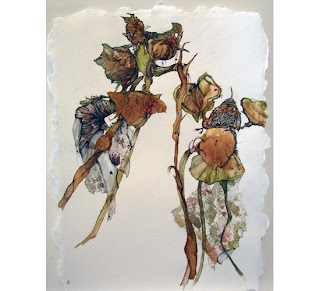 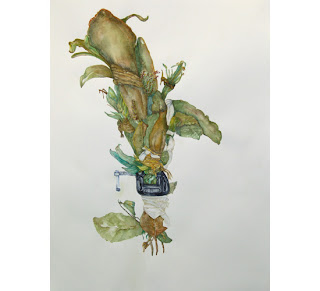 Here’s a sampling of two of her nature based paintings. There’s a wild, visceral connection here between plants and human relationships. See more at http://www.pamrogersart.com/ 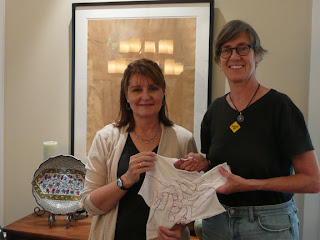 We’re standing in Pam’s dining room in front of one of her bleached cyanotype prints with a Turkish decorative ceramic plate on the table. Pam stitched her six gloves into a tangle of days and events from her war week in 2009. 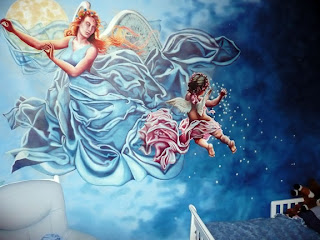 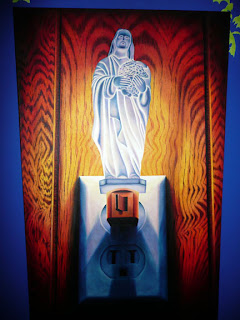 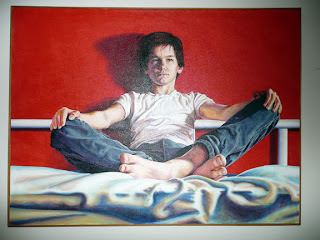 I leave you, readers with a selection of Kate Kretz’ paintings on the walls of her home including an angel mural in Ilaria's bedroom. Kate is also a textile artist, whose full spectrum of work, including her hair embroideries can be seen at her website http://www.katekretz.com/
Posted by Cecelia Kane at 9:48 AM